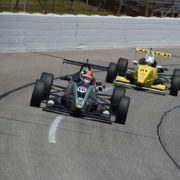 After a successful first season in the IMSA Cooper Tires Prototype Lites Powered by Mazda, Extreme Speed Motorsports will return to the series with three full season entries and one partial season entry for 2016. Kicking off the season next month at Sebring International Raceway in support of the IMSA WeatherTech SportsCar Championship, drivers James Dayson, Max Hanratty, Naj Husain and Andrew Hobbs will each also return to pilot their four identical Elan DP02 race cars, powered by a 230hp Mazda MZR engine.

The 2016 race calendar will take the team to six different venues across North America, each event offering two 45-minute races in which drivers and teams can earn championship points.

This year will mark James Dayson’s first full season racing prototypes, after racing for several years in the Mazda Road to Indy’s Cooper Tires USF2000 Championship. The Canadian made his IMSA Lites debut last year at the Road Atlanta season finale, where he impressively earned a 9th finish after starting at the rear of the pack, in wet conditions. This year, Dayson will pilot the No. 16 ESM Elan DOP02.

Hardland, Wisconsin native Max Hanratty also comes to the team from an open wheel racing background, starting at the legendary Skip Barber Racing School. From there, he competed in the F1600 Championship before moving up to USF2000 in 2015 to become teammates with James Dayson. Hanratty first joined ESM mid-season in 2015, proving he could run at the top, and ultimately earning a 5th place finish. He returned to the series to compete in the season finale, earning a 6th place finish in the first race of the doubleheader event. He will race the No. 30 ESM Elan DOP02 for the 2016 season.

Technology entrepreneur and investor Naj Husain joined ESM for his first full season in 2015 after building a career in Radical Sportscar competition on club and national levels with the SportsCar Club of America (SCCA). Husain competed in the majority of the 2015 season, earning a top-10 finish at VIRginia International Raceway. He finished off the season with a 9th place finish within the Master Class. Husain will return to compete in the No. 3 Elan DP02.

Although commonly associated with former race car drivers Greg Hobbs, and David Hobbs, young Andrew Hobbs has worked diligently to honor the legacy of his father and grandfather as he continues to build his own motorsports career. After a successful career in karting, Hobbs also graduated from Skip Barber Racing School before competing in USF2000 and F1600 Formula F series. In 2015 Hobbs joined ESM for the Mazda Lites season finale, also his series debut, impressively earning 7th and 5th place finishes. Hobbs is currently only slated to run the No. 31 Elan DP02 for the season opener at Sebring International raceway, with the rest of the season to be determined.

“I’m really excited for the team we have assembled for the Lites Championship in 2016,” said ESM Team Owner Scott Sharp. “We have a great group of drivers who all have tremendous potential, and I fully expect each will have the best season of their careers.  Furthermore, they are all great personalities who will provide strong chemistry for the team, and that is hugely important! We have worked tirelessly for the last 3 months to tear each car to the bare tub and build back perfectly. I expect great performance from our cars!”

James Dayson
I couldn’t be happier to be signing with ESM for the 2016 Mazda IMSA Lites Championship. I did one weekend at Road Atlanta with the team and was very impressed. It was such a natural fit for me coming in. They run a very professional outfit and everything just seemed to click with me and the team. It also really helped that I had the best race in my career going from the back of the field up to a top ten in the rain.

There is a great group of guys at ESM and I feel we can make some great strides in the contending for the championship and wins this season. It’s going be fun to grow together and see what we can accomplish. We’ve done a lot of work to get ready for the season and I’ve been training hard. While I haven’t tested as much as I would have liked in the IMSA Lites I’ve been staying fresh by running a bunch of Pro Mazda tests the last few months.

I’m excited for the season to begin. I’m coming in with some big goals and to fight for top 5’s and the podium each and every race. My driving has come a long way and last year was a big step forward for me. I’m looking forward to continuing that momentum to get some continued success with ESM.

The 2015 USF2000 season has been one of great progress and new gains for James Dayson. The continued hard work is beginning to pay off as the series and drivers head to Toronto to kick off the summer season. “I can’t wait to get back on the track at Exhibition Place in Toronto. As a Canadian I love coming here to race on this wicked track. It’s an awesome event and the crowd is very passionate about motor racing, plus the added bonus of it being a home race for me and the other fellow Canucks.” mentioned James. Just in time for the race too comes good news for the James Dayson camp. It is with great excitement that they announce his new sponsor joining in time for the upcoming Honda Indy of Toronto.

“I couldn’t be happier to have Walter All Natural Craft Caesar Mix come on board. It is the beginning of a new partnership between myself and this awesome fast growing local Canadian company,” says James. “We will have some new opportunities and creative marketing for the brand to help them grow through our sponsorship agreement.”

“The Walter team, as proud Canadians and sports lovers, are very excited to be teaming up with a local Canadian athlete James Dayson as a sponsor and supporter of motor sports. James’ passion for racing is inspiring and contagious and we look forward to teaming up with him to spread the word about his amazing sport and team,” Zack Silverman, co-founder and owner of Walter commented. “All of us at Walter are long time racing fans so working with James and his team was a unique way for us get more involved in a sport we have always enjoyed. At the same time, we want Walter as a brand to be involved in fun and engaging community events that bring people together — and we think auto racing is definitely that — so we hope our involvement will help more people learn about Walter.” 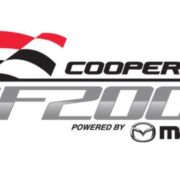 Sheboygan, WI – As the calendar year draws to a close, ArmsUp Motorsports has signed two of their four drivers to contest in the 2014 Cooper Tires USF2000 Championship Powered by Mazda. Seventeen-year-old American racer Peter Portante and 35-year-old Canadian racer James Dayson will join the Wisconsin-based team for the season’s entirety.

Portante raced with AUM previously in 2013 in the SCCA Runoffs and ended the season on a high note, winning the 50th SCCA National Championship Runoffs from the pole position. After starting racing in go karts in 2003 at age seven, Portante participated in the Skip Barber Racing School Summer Series in 2012. With his sights set on IndyCar, the Connecticut native then joined the Mazda Road to Indy in 2013 for a full season effort with Belardi Auto Racing in the USF2000 Championship. With two podium finishes, Portante finished in the top 10 of the final championship standings.
“This will be my second year in USF2000, and the only reason to return is to win the championship,” said a determined Portante. “I believe ArmsUp Motorsports gives me the best chance to do it. I have been able to race with AUM in the Runoffs, and it was a fantastic experience. I think it will really help speed up the learning period with the team. It’s really a great group of guys and I know we will surprise a lot of people. This is my second year in this series, and it’s down to business. I want to spend as much time as I can with the Cooper Tire girls on the podium.”
For Dayson there will be a sense of familiar for the approaching season, with a full year racing with ArmsUp in USF2000 under his belt. The Vancouver resident earned nine second-place finishes in the National Class, a class within the series allowing the opportunity to advance to the main Championship Class. Starting in 2014, the series will feature only the Championship Class, adding to the level of already intense competition. Unlike most of his competition, Dayson started his racing career at age 33. He went on to clinch the 2012 Cooper Tires USF2000 Winterfest National Class Championship before signing with AUM for a full USF2000 season in 2013.

“I’m excited to be returning for my third year in USF2000,” said Dayson. “It’s a great series that is very well run and operated by Andersen Promotions. The fact that there is only one class now means I have to step up my game. I’m looking forward to the challenge and to keep pushing myself and improving. 2014 is going to be my biggest challenge yet. The last two years in the National Class were great for my experience and learning, and I’m now ready to compete at the same level as everyone else and see what I can do.

“One of the best parts for me about my return is getting to compete with ArmsUp for a third consecutive year. The support I’ve got from the team has been above and beyond what I could ask for and I look forward to having another year to build upon our successes from the past two seasons. Racing with ArmsUp is simply fun. They are a very professional team that takes great pride in what they do. The fit couldn’t be any better. I can’t wait to get back in the car and start 2014 already.”
“2014 is really going to be a strong year for us,” said ArmsUp Motorsports owner Gregg Borland. “Both of these drivers are dedicated to continuous development. They saw improvement with each race in 2013, and we fully plan on capitalizing on that for 2014. We’ve got an impressive driver lineup taking shape and a strong, dedicated crew. With this, we have a strong chance to win races next year. We’re working hard to put the finishing touches on our 2014 USF2000 program and hope to have more exciting news soon.”
The 14-race season will be comprised of five double-headers, one tripleheader and one solo event. The first race of the 2014 season begins March 29-30 on the streets of St. Petersburg, Florida.